(3) – THE SCIENTIFIC RESEARCH STARTS – I don’t know if you are aware of all the steps required to prepare a clinical trial. It’s long and quite complicated. It has to be done by experts, and I’m not one.

It has to be approved by an Ethics Committee formed by heath personnel, lawyers, specialists in bioethics, citizens, etc. Their role is to assess if such research would provide significant medical knowledge or clinical advances and also to make sure that it will not represent a risk for the participants.

Informed consents for the patients have to be prepared, a mathematical study –to calculate how many patients have to be included in the study in order to obtain results that are statistically significant– is also required, and the study has to be designed (its objectives, methodologies, equipment, etc.).

The study also needs to be insured: in this case, at no extra cost to our policy as the Spanish Health Department described it as a consumer product without risks (and not as a health product).

In June 2014, once the multiple steps and preliminary studies were finalized, the clinical trial was designed (everything was supervised by our scientific director, Dr. Alex García-Faura).

I also have to thank Dr. Blanca Piedrafita and Dr. Isabel Pérez for their help and brilliance, as they have been key in designing and publishing this study.

The main objective was to verify if the tongue and mouth movements –which made an impact on us in previous months– were really caused as a result of fetal hearing, and also to study their development during gestation.

We recruited patients from our center that were between 14 and 39 weeks pregnant. In each case we studied the response before, during and after the music stimulation on the fetus on 3 consecutive times of 5 minutes.

We also assessed the fetal activation, i.e. the presence of extremities and head movements to verify if the music was waking them up.

Additionally, we analyzed the changes of the cardio frequency and the blood flow in the middle cerebral artery of the fetus to measure the well-being index of the baby.

We determined 3 different groups of patients:

1. Abdominal music: emitted at 98 decibels (equivalent to the noise of a passing train)

The music selected for the initial study was of Johann Sebastian Bach: Partita in A Minor for Flute Alone – BWV 1013.

During 3 months we evaluated 106 patients and neither medical incidences nor adverse effects caused by the use of the vaginal device were registered. We were delightfully surprised to see the excitement of the parents when they saw the spectacular images of the face, mouth and tongue movements of their babies during the ultrasound sessions. 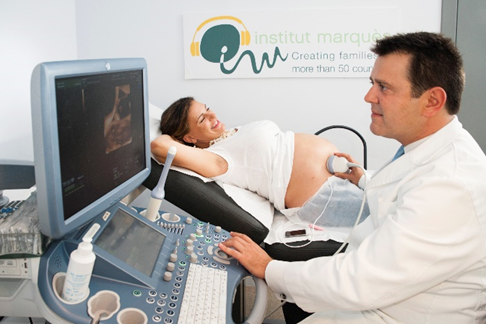 Dr. Àlex Garcia-Faura carrying out an ultrasound to a pregnant patient using the Babypod

Most of the patients decided to repeat the experience, and some of them even brought family members to the next ultrasounds. The truth is that we were overwhelmed with the amount of requests to participate. In less than a year we had included more than 1.000 patients in parallel studies on intravaginal fetal hearing.

At the ultrasound rooms music was always present: patients didn’t know when the music of the vaginal device was on or off, and they didn’t know if they were in the “control group” either (in which the device was never turned on).

All the examinations were filmed and –different gynecologists to the ones who performed the ultrasounds– analyzed the videos.

The double blind experiments are used to avoid the influence of the placebo effect or subjective perceptions of the observer in the research results. This way, neither the participants nor the researches know who belongs to the “control group” (receiving placebos) or to the “experimental group”.

This scientific study has its technical and methodical part, but for the doctors it represents a very important emotional involvement.

Throughout our professional life, during the ultrasounds, the fetus has been a passive subject, which we observe and measure. But in these ultrasounds is different: the fact that we are able to wake them up, generate a response and communicate with the baby it’s fascinating.

In many of these ultrasounds the gynecologists are infected with the parents emotions caused by this overwhelming experience. It has been, without a doubt, a thrilling discovery.