The age stated on the ID does not always meet the age of the ovaries. When we talk about the pregnancy chances per cycle, we doctors refer to the ovarian age, and it is important that you are aware of it because it marks the level of your reserve of good eggs. To know it, it is only necessary a blood test, which you can even take without fasting. Nowadays, the clinical marker of choice to know the ovarian reserve of a woman is the Anti-Müllerian hormone (AMH). This hormone is produced by the ovarian follicle cells and does not vary during the menstrual cycle. Well then, the results of this test are compared to those established as normal for each age range.

To date, in order to establish the ovarian age in Europe, we used as reference values from tests from women of other continents. Therefore, the results obtained were not entirely reliable because they did not adapt to the reality of European women.

Our study will establish a before and after

Fortunately, this is now history. For the first time, Institut Marquès and Laboratorios Echevarne have analysed the markers of the Anti-Müllerian hormone (AMH) of a huge amount of Spanish women (more than 10.000 women aged 20 to 45 years old). The result is the study “Clinical use of the Anti-Müllerian hormone in the prediction of the ovarian age in Spain”, which determines the values of the Anti-Müllerian hormone in the Spanish population based on chronological age and obtaining an estimate of its ovarian reserve. And the results of our work show significant differences of the data previously published in other countries. This could be due to the lack of standardisation of the methodology for its measurement, but also due to factors associated with race, environment, etc.

What does this mean? That we have drawn up our own evaluation tables, which are very easy to use and a useful tool for women and that we will finally be able to correctly assess their monthly fertility. The second great news is that these tables can also be useful in the rest of European countries, since, surely, the values are much closer to their reality than those they were using so far. 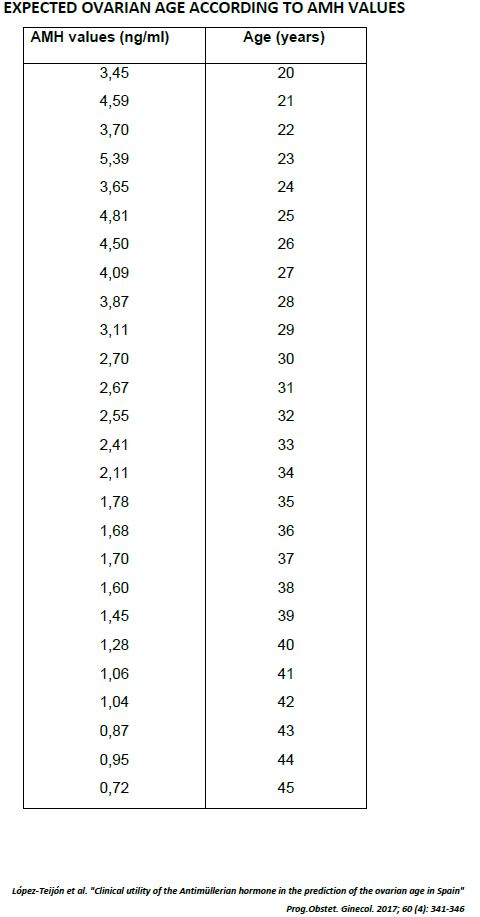 It is common that the ovarian age of a woman varies about 3 years above or below her chronological one. For example, a 37-year-old woman could have an ovarian age of 40; this fact could lead to a variation in the prognosis of her ovarian reserve and her fertility index.​

What does it give me to know my ovarian age?

The woman is born with an already established endowment of oocytes that progressively disappear due to a phenomenon called atresia, so that, upon reaching puberty, approximately 300,000 eggs remain in the ovaries. About 1,000 oocytes develop in each menstrual cycle, but only one reaches ovulation; the other ones will go lost.

During the consultation, many of my patients remain surprised when I explain them that at 35 years of age there are only 10% of the eggs left and that their quality is also gradually getting worse. Nor has anyone explained to them that it is very important to know the status of their ovarian reserve because, although they consider themselves young, their eggs may not be so.

Only knowing your ovarian age you can better plan your future motherhood: whether you want to advance it or if you prefer to freeze your eggs or, in the worst case, verify that you will indeed need an egg donation.

In a nutshell, the AMH reference values obtained allow us to inform women of their real ovarian reserve and their monthly fertility index, and they can be used to advise a patient about her success chances when undergoing an ovarian stimulation, to vitrify her eggs or undergoing in vitro fertilisation, since they are a faithful prognosis of the quantity and quality of her eggs.

Thanks to this study, we have also observed differences within the Anti-Müllerian hormone levels between Spanish autonomous communities, but for now, without any pattern that can explain them. We will continue investigating…

Previous Post The forest of embryos: a forest, a tree, a life
Next Post Passion for football starts before birth