Today I’d like to share the results of a survey we’ve carried out on our patients with you.

We’ve asked up to one thousand patients from 31 different countries, all childless and with fertility troubles, if they would prefer to have twins, an only child, or if they didn’t mind either option.

The results show that most patients would rather have twins, up to 70% either want a twin pregnancy or don’t mind, whilst only 30% wish for a single pregnancy.

As sterility specialists, we aren’t surprised by these findings. Every day we go through the conflict between what our patients want and what we, as doctors, recommend, as it’s hard to explain all the risks a twin pregnancy entails to a woman whose biggest fear is never becoming a mother. When speaking of the possibility of giving birth to twins, most imagine they’d be double times happier because their family would already be complete.

It’s hard to decide on the number of embryos we must transfer to achieve success while preventing, at the same time, a twin pregnancy.

For an embryo to implant after In Vitro Fertilization, and for it to lead to an evolutive pregnancy, it’s necessary: that the uterus is ready to take it in, that the embryo has an adequate morphology (number of cells, similar appearance of these, etc.), that it has a normal chromosomal set, a powerful energy (given by mitochondria, less intense as ovaries get older), for the embryo and endometrium to work together to achieve implantation, and for immunological rejection not to happen. For us, who dedicate our lives to this matter, every single baby is a miracle!!!

According to studies carried out in our Center, in the best of cases, when embryos come from egg and sperm donors, 50% show chromosomal abnormalities and that percentage is increased with the woman’s age, reaching 85% altered embryos in 40 year old patients.

Thus, the main strategy to reduce the risk of having a multiple pregnancy without lowering pregnancy rates is to analyze the embryo’s chromosomes to transfer only those that have the potential to evolve.

The embryo can divide and, even by transferring one single embryo, we can have identical twins. Here you can see an exceptional image of a blastocyst in its fifth day of life, which will lead to two twins, given that it has two internal cell masses, which are the origin of the embryo tissues. Normally this cannot be seen because they divide later. 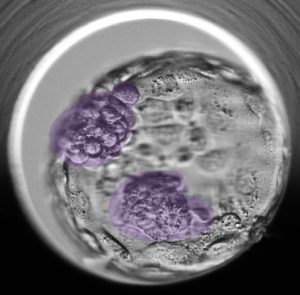 Any case, whenever we see two little ones in the scan, in most cases we wholeheartedly share our patients’ great joy and pride!

Coks Feenstra, expert in twin studies, after intervewing dozens of adult twins, asserts that “being a twin means having double amount of joys and half the number of sorrows.”

12 years ago we had the opportunity of living an excepcional case. We had not double, but triple amount of joys: the birth of identical triplets.